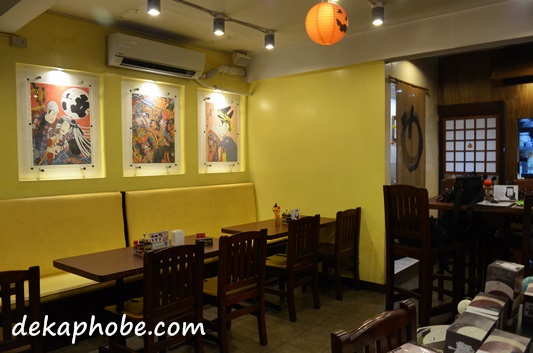 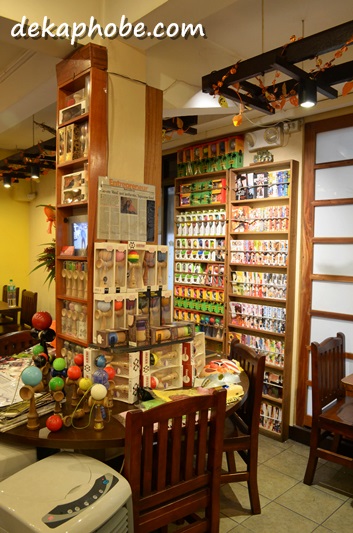 I haven't realized that there's a ramen shop in the Morato area (except for the newly-opened Nihonbashitei) until I went to try Go-en in Jardin de Zenaida along Sgt. Esguerra.

Go-en, named after the Japanese five yen coin to symbolizes good luck, opened in May 2012 by longtime partners Marilyn and John. Marilyn and John are living in Japan for more than two decades. The earthquake in Japan last 2011 made them decide to establish a business in Manila. Their love for Japanese food has made them bring real Japanese ramen to Manila.


We have tried several ramen bowls from Go-en. We have tried the Kogashi Shoyu (Php 380) and the Cheese Ramen (Php 350).

Kogashi Shoyu has a smoky shoyu flavor with lots of peppercorns while Cheese Ramen is miso based with moyashi, minced pork, corn and topped with cheese. I love the peppery taste and the thick kakuni (braised pork belly) of the Kogashi Shoyu. Though a bit heavy for me, I loved how the cheese melted to the broth. A cheesy treat, indeed!

The Karamiso is a creamy miso-based soup with a kick of chili oil. I was initially hesitant about trying this because of the reddish broth. Surprisingly, the broth isn't as spicy as I expected, however, it is enough to make you sweat. The Tantanmen is spicy sesame broth-based, a bit thicker than the previous ramen bowl we tried. I loved the subtle heat brought by the Tantanmen. It is something I would love to have next time.

You may also have these ramen in D'Lite size for as low as Php 198 per bowl.

One of my favorite Japanese side dishes, their version of Kara-age is amazingly delicious. The pieces of boneless fried chicken are huge and more than enough for sharing.

Go-en also serves donburi or rice toppings. For donburi, we have tried the Sakanadon (Php 175) and the Kakiagedon (Php 175)

For dessert, we were served their homemade Mochi Ice Cream (Php 80) and Matcha Ice Cream.

The flavor varies depending on what they make during the day. During our visit, we have tried the Matcha flavor. They also served us their homemade matcha ice cream.

Go-en is also the hub for the Japanese Kendama here in Manila. Kendama is a traditional Japanese toy almost similar to a cup and ball game. This takes a lot of practice to be able to play Kendama but the Go-en staff can teach you.

The Kendamas displayed in Go-en are from Japan and can be purchased in Go-en.

Go-en Japanese Ramen Shoppe is a lovely piece of Japan in the middle of Quezon City. I love the simplicity of flavors and the Japanese vibe this place has to offer. I can't wait to go back and treat myself to more ramen.

Thanks to Go-en Japanese Ramen Shoppe for having me.