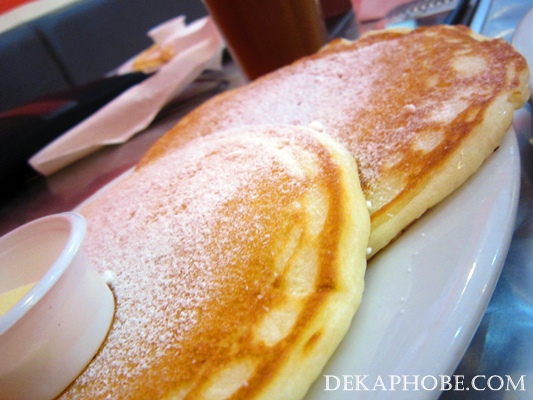 It was one of those lazy mornings again that I just want to eat and bond with a friend.

This breakfast was actually accidental: I just called him to ask if he's still in the office so I could drop by, he said he's already in the bus and the bus is already around Ortigas, so I asked (well, mandated is more proper actually) if we could meet up as I'm in Ortigas. Being such a good friend, he did alight from the bus, coming from the night shift and all.

We were supposed to have burgers since I was telling him how good it was when I first went to Charlie's. It didn't occur to me that they are only serving breakfast in the morning. Bummer.


We were curious about the Breakfast Platter, but we decided to order ala carte for the meantime (yeah, weak, I know).

We first had our drinks: mine is the usual Brewed Coffee (Php 65) while my friend has Charlie's Iced Tea (Php 65).

We each had 2 pcs Buttermilk Pancakes (Php 95).

I only have one word to describe their pancakes: fluffy, fluffy. FLUFFY!!! :)

Their hashbrown is homemade so expect that it won't look like the usual fast-food hashbrown.

If you have a bigger appetite, you can try Charlie's Platter for Php 320. This includes all you can eat buttermilk pancakes, refillable brewed coffee or Charlie's Iced Tea plus your choice of:
- Hashbrown or Skillet Potatoes
- Scrambled Eggs or Sunny Side Up
- Sausage Patty, Sage Sausage, Bacon, or Ham.

I might try Charlie's Platter next time, but I'm also curious about their Breakfast Sandwiches and Eggs Benedict variants.