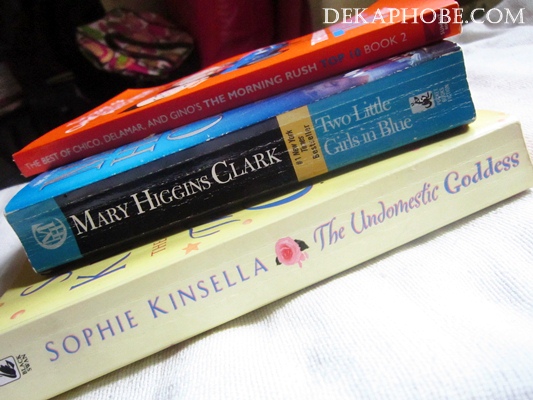 Before I sum up the 2012 Book Challenge, here are the links of the previous months:


1. Like The Flowing River by Paulo Coelho
2. Charlie and The Chocolate Factory by Roald Dahl
3. The Kite Runner by Khaled Hosseini
4. The Time Traveler's Wife by Audrey Niffenegger
5. Her Fearful Symmetry by Audrey Niffenegger
6. Ligo Na U, Lapit Na Me by Eros Atalia
7. One Day by David Nicholls
8. A Thousand Splendid Suns by Khaled Hosseini
9. Bakit Hindi Ka Crush ng Crush Mo? by Ramon Bautista
10. The Undomestic Goddess

- 3-year-old twins Kathy and Kelly were kidnapped in their own home on their birthday, the kidnappers were asking for millions as ransom. The twins' parents cannot pay such ransom since they aren't that rich but the father's company was willing to pay the ransom. When the twins are supposed to be returned, they find only Kelly in the car and a letter saying that the suspect killed Kathy. Twin instinct and maternal instinct will play major roles in this novel as they search for the Pied Piper, who hired the kidnappers to perform the crime. A very interesting and timely read.

40. The Undomestic Goddess by Sophie Kinsella

- Samantha Sweeting works as a lawyer at a top law firm in the country. She works everyday and she barely has time for herself. A huge mistake had her terminated from her job that she rode a train and went to someplace. She was mistaken as a housekeeper. She pretends to know housework and learns to do so via Nathaniel's mother. Nathaniel is her employer's gardener, who she started to get attracted to.

She goes back to London to clear her name and her employers and Nathaniel find out that she isn't actually a housekeeper.

Will she go back to her previous job or be satisfied with her life as a housekeeper, with Nathaniel?

It's a really entertaining read. It made me a realization that we need a break once in a while.

- After the success of Book 1, The Morning Rush barkada published Book 2, which I think is as hilarious as the first book. My favorite is the "Ang Mahirap sa Maganda / Panget", "Funny Names" and many more. It's a very easy and entertaining read that you'd find yourself laughing alone. I can't wait for the next book.

I'm proud to say that I finished the 2012 Book Challenge (with an excess of 1 book). I'll try to accomplish more this year.

Which books have you also read on my list? Which ones interest you?:)