November 18, 2012
The challenge is still alive! More than finishing a quota for this year, this challenge makes me realize the value of reading books. I believe that we should really make time for some reading. Maybe you can start at 10 pages a day? That would suffice. 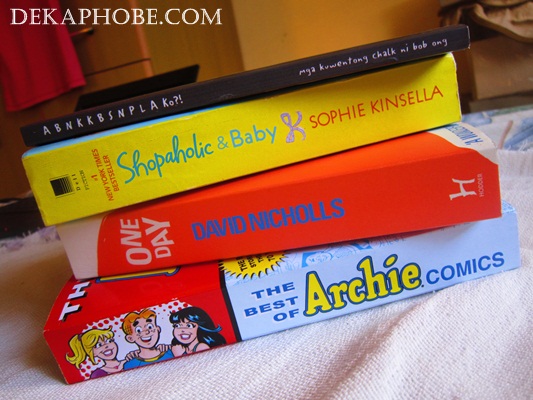 As a continuation of my previous post, here are my October books:

Bob Ong's first book is about his memories from Grade School to College, until his return to school as a teacher. He remembers how simple the life of being a grade-schooler is, and contrasts with his struggles when he reached college. He discusses his troubles when he entered college. His personal frustrations and his exhaustion from all the pressures.

I couldn't say Bob Ong should be emulated but the book teaches us that one could always correct his/her mistakes and we shouldn't stop learning.


32. One Day by David Nicholls

The novel begins at Emma and Dexter's graduation night, July 15, where they met and almost made out. They promise to keep touch, and so they remained friends for years. The book revisits their relationship every July 15 of the year, where they continually communicate with Dexter trying to be a popular TV host while Emma is stuck in her waitress job. They try having relationships with different people, Emma having a long term relationship with Ian, who is a trying-hard comedian and with Phil, a married man. Dexter has his own string of relationships before settling down with Sylvie. Dexter got divorced and tries to be with Emma, who is again attached to another guy. They realize that they were meant to be together, got married, and live a happy life.

However, their happiness was cut short when Emma died from an accident. Dexter tries to move on, as advised by his widowed father who's trying to do the same for ten years.

The book ends with the moment Emma and Dexter say goodbye to each other after they spend their first night together and promises to keep in touch.

The story tells a lot that we make our own choices, good or bad. But things happen when they are bound to happen. We have to learn from it and move on.

As a celebration of Archie Comics' 70th year, a compilation of the funniest comic strips from 70 years ago till the present was published. It even includes other characters like Sabrina the Teenage Witch and Josie and the Pussycats. You can actually see the development of the comics from an oldie Archie to modern Archie. The humor might be off due to times but the quality of this comic never fails.

34. Shopaholic and Baby by Sophie Kinsella

Rebecca Brandon is finally pregnant. She now focuses on preparing for her first-born's things, but mostly unnecessary. She tries to nail a new home for their family through her "talents". Though she already has a competent doctor, she insisted on switching to a celebrity doctor, which turns out to be Luke's ex-GF. She copes with pregnancy and jealousy at the same time while keeping her job as a personal shopper intact. Quite entertaining book. A nice but predictable ending.