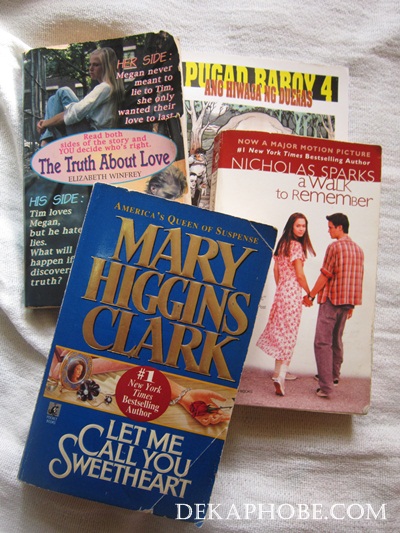 Finally! I reached my quota last August! I spent my August reading --even during vacation. :) I read in the airport and I still read on the plane and even in the hotel before I sleep. Nerdy, right?

I tried reading books with old settings: mostly 90s when cellphones don't even exist. It was fun reading them, it makes me realize how easy communication nowadays, yet some people fail to communicate.

As a continuation of my July post, here are my August books:

23. A Walk to Remember by Nicholas Sparks

A 57-year-old Landon Carter recalls his teenage years when he met a girl named Jamie Sullivan, the Baptist pastor's only daughter. He used to make fun of Jamie due to her unusual teenage ways like carrying a bible wherever she goes. He spends time with her by walking her home until he realizes he is in love with her. Jamie admits that she's dying of leukemia. Landon asks Jamie to marry him. Landon recalls the years he was with Jamie and he still hasn't removed his wedding ring.

I have re-read this book for n times but it still makes me cry. It has made me cry more than the movie.


24. Let Me Call You Sweetheart by Mary Higgins Clark


Kerry McGrath, a prosecutor, brings her daughter to a plastic surgeon to heal her scars from a car accident. She noticed that 2 patients look like a murder victim from 10 years back. She discovers that the surgeon was the victim's father. She tries to re-open the crime and discover things about the people related to the victim. While trying to resolve the crime, she puts her judgeship nomination and her daughter's life in danger.

This is a really interesting novel. It kept me guessing until the end.

One of the earliest Pugad Baboy compilations. It was published at around 1992 so the political humor might be a little off, or maybe unfamiliar at all. There are some parts where Polgas can't talk, which is a little unusual for me. Political humor aside, you'll still appreciate the book.

26. The Truth About Love by Elizabeth Winfrey

Megan Henry met her longtime crush, Tim Wilson at her cousin's wedding. Tim Wilson is a college freshman while Meg's still in high school. Tim thought Meg was already a freshman, like him. So Meg pretended to be in a university dorm, where Tim take her home after their dates. Meg struggles on how she's going, to tell the truth to Tim without losing him.

It was fun to read stories written during times when even a cellphone doesn't even exist. Though the story is very idealistic, it was nice to read stories in the 90s setting.