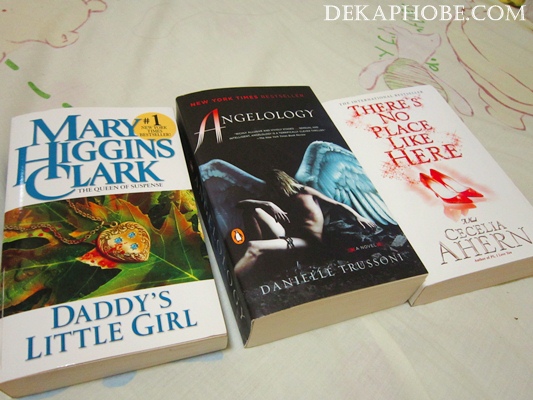 As much as I wanted to read 4 books like last March, I wasn't since "Angelology" took me 2 weeks to finish (whew!). If you're into mysteries, I recommend that you read these books.

Here are my April books:

Seven-year-old Ellie was the key witness when her fifteen-year-old sister Andrea was murdered near their home. Rob Westerfield, a teenage brat from a rich family and Andrea's secret date, was arrested and jailed for more than 20 years. Andrea's death brought rift to the family that Ellie's parents divorced after a few years and her mom died an alcoholic.

After 20 years in jail, Rob Westerfield files for parole and tries to pinpoint Paul Stroebel, an admirer of Andrea during that time, as the killer. As an investigative reporter, Ellie also discovers Will Nebels, a neighborhood handyman as a possible suspect.

Ellie uncovers the backgrounds of the three possible killers while endangering her own life as she continues to seek justice for the death of her sister and the rift it made to her family.

The novel is nerve-wracking as it will confuse the reader on who the real killer is. But in the end the events will be a bit obvious on who the killer is. A must-read, nevertheless.

Sandy Shortt started to be obsessed with searching for missing things ever since her childhood classmate, Jenny-May Butler, suddenly disappeared in their neighborhood. Her obsession in finding missing things concerned her parents so much that she had to be brought to a counselor, Gregory Butler. Her relationship with Gregory changed over the years, that they continued to be friends after her stint with the Gardai and when she opened up her own missing persons' agency. She was about to meet Jack Ruttle, whose brother Donal disappeared more than a year ago, but while jogging she found herself in a world where all missing things --and persons go. She found herself surrounded by all the missing persons she had been looking for for quite a while, her problem is: she doesn't know how to go back home.

The novel kinda confused me at the beginning, maybe because of the two perspectives: from Sandy and from Jack.

But it's a nice read. It teaches us that we should be appreciative and satisfied with what we have. And we shouldn't waste our time looking for things we don't have that we tend to ignore our blessings.

The story begins with Sister Evangeline, a French-Italian woman who was left under the care of the sisters of St. Rose Convent by her father. By trying to help an art historian named Verlaine, she starts to unlock and discover the truth about why her mother died a few years ago and why her father left her under the nuns' care. She discovers that she belongs to a family of Angelologists, a group who study angels and she was left in the convent to protect her from Nephilim, a breed of humans and angels.

She discovers more of angelology as she finds out that the elderly nun in the convent was also an angelologist. The elderly nun will reveal more of what she does not know in the world.

This is a great read, though it took me almost 2 weeks to finish. I could see this book becoming a movie, and I find it really intriguing that there's a study called angelology.

I just bought a bunch of books, more book reviews next month!