December 17, 2012
This year is about to end, and so is my book challenge. I'm really positive that I could reach 40 books this year, but I hope I could finish more next year. How about joining the challenge next year? 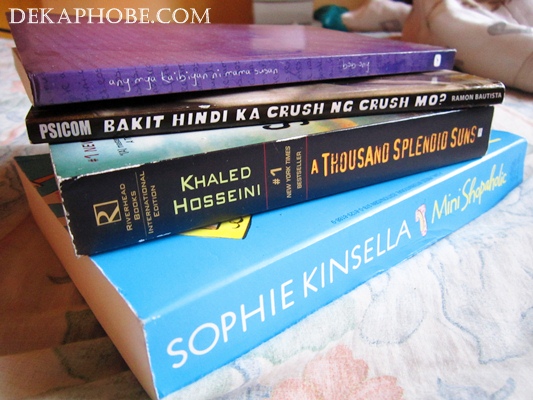 To continue the previous month's list, here are my November books:

- Becky Brandon is now a doting mother to a little bratty two-year-old Minnie. Still living with her parents, she and her husband Luke are still working on having a permanent home. The country undergoes a financial crisis that will affect Becky's job and her shopping habits. She tries to discipline Minnie (though she's spoiling her than disciplining her). She also plans Luke's surprise birthday party, trying to do it herself, she finally asks help from friends.

The story ends with Luke's successful party and figuring out that Minnie can behave well with a little toughness. Luke asks Becky to join him as he works in Hollywood for a few months.

- I feel happy that I finally finished the Shopaholic series. Nothing too special with it. It's not that Becky's going to change. :P

- The book is a collection of journal entries from Galo, a college student who lives with his relatives in Manila. He is quite indifferent with his extended family's lifestyle and he feels excluded. He decided to visit his lola in the province as he received letters about her illness.

He gets surprised about his lola's change in behavior. Suspecting a cult, he discovers things about the town that he never knew before.

The story was kinda spooky. It would leave you with more questions about Galo.

- The second novel of Khaled Hosseini is about two women from opposite backgrounds: one is Mariam, an illegitimate child of a rich man but raised in poverty, and the other is Laila, the daughter of an educated man. Both women were forced to marry the same man and lives inside a house with domestic abuse and strictly traditional culture.

Two women will try to fight off what was expected of them by the society for their own peace of mind and for the future of the children produced by their marriage.

This is one touching novel that everyone should watch. Not everyone ends up with what they dream to be but we should make good with what we are given.

- Ramon Bautista's first book is a compilation of the questions and answers from his Formspring account. He has witty answers to non-sense questions and strong emphasizes the importance of education. The book was full of photos that I found really funny. I can't wait for the second edition of this book.