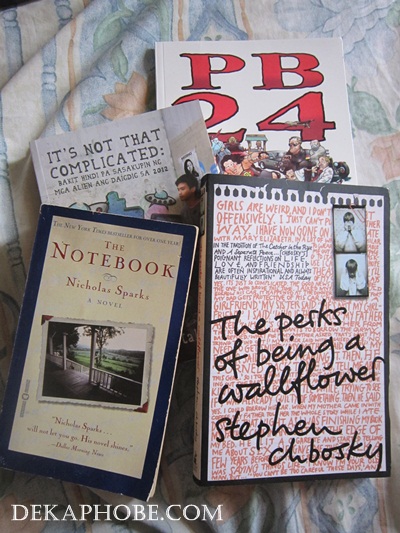 The game is still on! Like last month, I completed 4 books. I'm quite positive that I could finish 40 books by the end of this year. Yey!

As a continuation of my August post, here are my September books:

27. It's Not That Complicated by Eros Atalia

The second part of Atalia's book "Ligo Na U, Lapit Na Me", focuses on Intoy's life after graduation, and after Jen. While he's trying to adjust with his work (his sarcastic but witty humor still gets him into trouble), he's also trying to forget Jen. And he meets Tina, the company's HR officer, who suddenly gave him unusual attention. Will Tina be the solution to make Intoy finally forget Jen? Or add to his misery? You must read the book to find out.

The latest installment of Pugad Baboy, it gives humor to the political and current issues circa 2011-present. I found it witty and really funny. I love the team-up of Pao and Tiny in their story arc "Green Heroine". However, you wouldn't be able to relate if you don't watch or read the news.

29. The Perks of Being A Wallflower by Stephen Chbosky

This book is a series of letters written by a 15-year-old boy named Charlie to an anonymous friend. He begins by sharing his grief due to the death of his good friend, who killed himself. He then shares about his adventures with his newfound friends, Sam and Patrick, and his attraction to Sam. He would even share about the secrets he would find out unintentionally but wouldn't divulge it to anyone else.

Reading this book will bring you back to memory lane and remind you of how you think during high school. This book will even teach you how important the role of parents in bringing up their children. This story might be shocking to some, but then, it's reality.

30. The Notebook by Nicholas Sparks

The story begins with an 80-year-old man visiting his wife in a retirement home, reading a notebook which is a story of their lives. The notebook contains their love story, which happened several years ago, during the time when Allie was already engaged to another man but found Noah and gave him a visit. He reads to him on how they reunited and make their love work despite the consequences. Now suffering from Alzheimer's, Allie failed to recognize that she's actually talking to her husband but would go back to normal after listening to the story.

This is the story that we always wish would happen to us, that we'll have somebody to be with when we grow old. The book is a testament that love can endure everything.

Reaching my quota this year, watch out for more books! :)