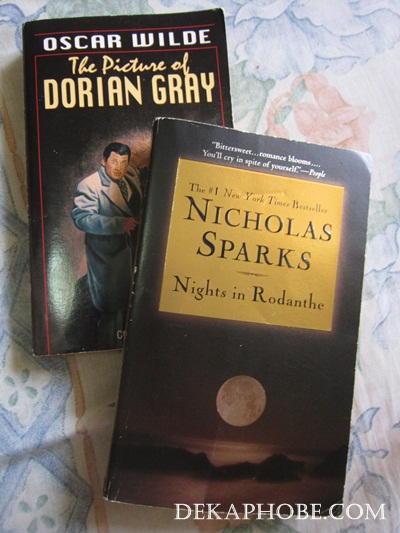 July has been the slowest month for my book challenge as I only got to read two books since "The Duchess" by Amanda Foreman took almost half of my July to finish.

Currently, I'm trying to keep up with my book challenge. As August is holiday-filled, I have lots of free time to read!

To continue my previous post, here are my July books, which ironically are books that I got to watch the movie versions before I read the books. No harm was done though, as their movie versions were really good! :)

21. Nights in Rodanthe by Nicholas Sparks

Adrienne Willis, a divorcee in her 40s, filled in for her friend who owns a bed-and-breakfast while her friend is away for a few days to accommodate a guest, a doctor named Paul Flanner. Paul is a doctor in his early 50s, who had to travel to Rodanthe to meet the husband of a patient who died after he operated on her.


The book is all about forgiveness and parenthood. That although we want to pursue other things,  responsibility gets the better of us.

I have watched the movie version, and it was also as good --or tragic as the movie.

This is definitely a must-read!

22. The Picture of Dorian Gray by Oscar Wilde

Oscar Wilde's only novel, The Picture of Dorian Gray is about a very good looking man named Dorian. Mr. Gray is deeply admired by both men and women that his painter friend, Basil loves to paint him. Basil gave him a beautiful portrait that Dorian wished that the painting get old instead of him. He falls in love with a young actress named Sibyl Vane, but Lord Henry, another friend, discourages him. He left Sibyl Vane which results in the girl's suicide. With Lord Henry's influence, Dorian lived a sinful life while keeping his youth. He then realizes that the portrait is the reflection of his soul.

I'm not much into classics but this is a very interesting read.

More books next month! I promise. :)