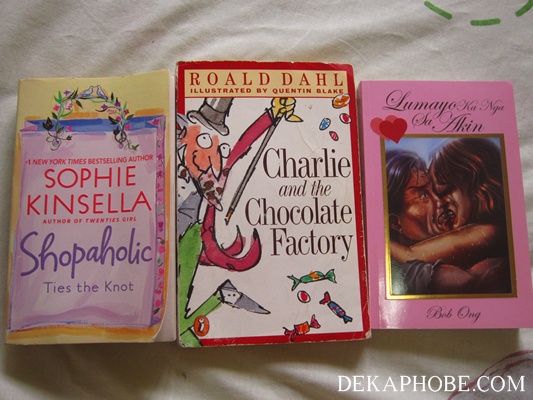 I got really busy last February, but I was able to read 3 books (yehey!). Though I still have a good supply for this year, I keep on buying books from Bookay-Ukay Pilipinas. I can't wait to buy more books.

This book was given to me as a Christmas gift (Thanks Jay!). A satirical novel from an anonymous author with the pseudonym Bob Ong. The book is in a script format and divided into three stories: an action movie, a love story, and a horror story. The stories are a humorous take on Filipino cinema during the 80s and the 90s. It gives a nudge on Filipino entertainment's lack of originality in the past. The book will bring back your childhood memories (if you used to watch Filipino movies) and will keep you laughing from start to end.

One of the greatest children's books of all time, which tells us about the story of a poor young boy named Charlie, who is living with his parents and grandparents in an old shack. They are so poor that his grandparents share the same bed. Though they are extremely poor, Charlie's family makes sure that he gets to eat a Willy Wonka Chocolate for his birthday. Willy Wonka is the owner of the world's best chocolate factory which is closed to the public when other chocolate factory owners try to steal Wonka's chocolate recipes. Willy Wonka opened the factory for 5 lucky children who will get the golden ticket found in Wonka chocolate bars, and Charlie was one of them. Being a selfless boy, Charlie ended up inheriting the factory when Willy Wonka wouldn't be able to run the factory anymore. This is one of the first books I've seriously read, and I love re-reading this!

The third book in the Shopaholic series by Sophie Kinsella, newly-engaged Becky Bloomwood is in heaven! She's living in New York with her fiance, Luke Brandon, working as a personal shopper at Barney's and looking forward to seeing her best friend's new baby. But things went downhill because while her parents are preparing and spending all their savings for her wedding in England, Luke's socialite mother is giving them an uber-lavish wedding in New York --on the same date! Becky tries to solve this huge glitch while keeping Luke out of the picture. This is a well-written novel that I liked it better than the first two. Thumbs up!