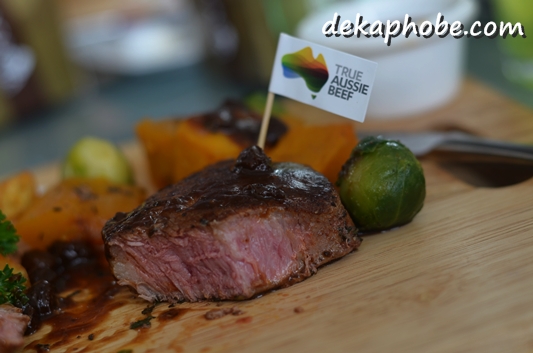 I was invited by the Australian Trade Commission (Austrade), together with Meat & Livestock Australia (MLA) to visit a few of the top restaurants around the metro to taste their dishes using Australian Grassfed Beef.

What is Australian Grassfed Beef? It is meat from cattle raised on natural pastures. It may also be called "pasture-fed" or "free-range". 97% of the cattle in Australia are located in a grass-fed environment. Grassfed beef has a yellowish fat tone, less marbling, and has a complex flavor due to a varies pastoral diet. This kind of meat is naturally low in fat and cholesterol with a higher level of Omega 3 fatty acids, which is known to lower blood pressure and reduce the risks to certain types of cancers.

For our trail, we were able to visit four restaurants that serve this healthy type of beef.

1. Top of the Citi by Chef Jessie (closed)

2. A Steakhouse at Acacia Hotel

I was happy to be back at Lucia Ristorante by Hotel Celeste for the second time.

For dessert, I had a scoop of Nocciola Gelato or hazelnut gelato made by the executive chef, Chef Lombardi.

Get a chance to win dining privileges worth Php5000 or roundtrip tickets for two to Australia via Qantas Airways when you order Australian Grassfed Beef at any of the participating restaurants. This promo is ongoing until August 23, 2015.

Thanks to Austrade and MLA for having us.