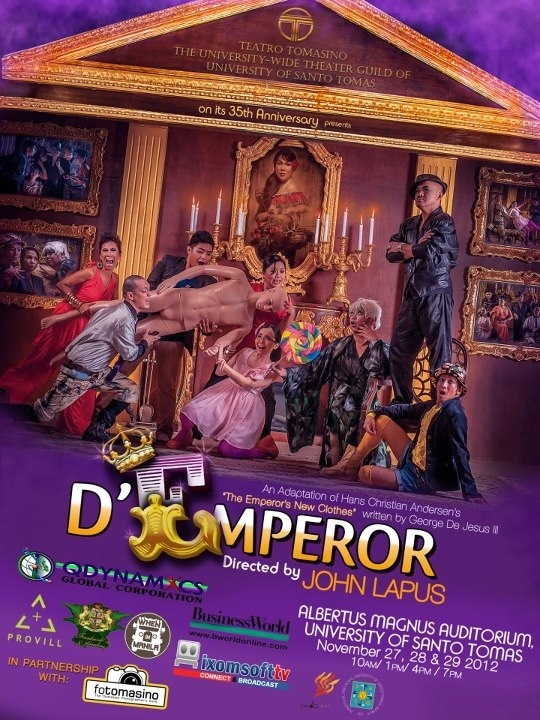 November signifies the end of the semestral break for college students and the start of yet another semester. But for the members of Teatro Tomasino in the University of Santo Tomas, November also marks the dates of their upcoming theater production entitled “D’Emperor”. Written by 5-time Palanca winner George De Jesus III, it is adapted from the short tale “The Emperor’s New Clothes” by Hans Christian Andersen.

“D’Emperor” is a satirical portrayal of a fashion magnate whose obsession over senseless extravagant fashion is taking its toll on his fashion house, Le Fashion Empire de Jour, especially when two seemingly sketchy, up-and-coming fashion designers promise the Emperor a new outfit which they say is invisible to those unworthy of their current positions. It is a story of how the arrival of these designers as well as a novice journalist altered the established order of the empire as well as the people working for the Emperor.

“D’Emperor” is Teatro Tomasino’s second theater production and the first major production for its 35th year. It is preceded by another play by George De Jesus III entitled “Kung Paano Maghiwalay”, staged last July and which served as the guild’s “recruitment production” to invite Thomasians to join Teatro Tomasino.

Teatro Tomasino is the university-wide theater guild of the University of Santo Tomas. It provides Thomasians with another avenue to learn more about the arts and in the process teaches its members discipline, responsibility and decision-making.

The organization was formed by 25 students on September 17, 1977 under the supervision of Professors Myrna Hilario and Piedad Guinto. At 35, Teatro Tomasino prides itself with a legacy of producing notable plays as well as distinguished alumnus who have become well-known in their respective fields.

The schedules for the play are as follows:

Venue is at the Albertus Magnus Auditorium, Albertus Magnus Building, University of Santo Tomas. Tickets are priced at PhP120. For more information, ticket reservations or further inquiries, you may contact Lea Licerio at 09161030818 or Claudine Dator at 09321476700.


This is a Press Release