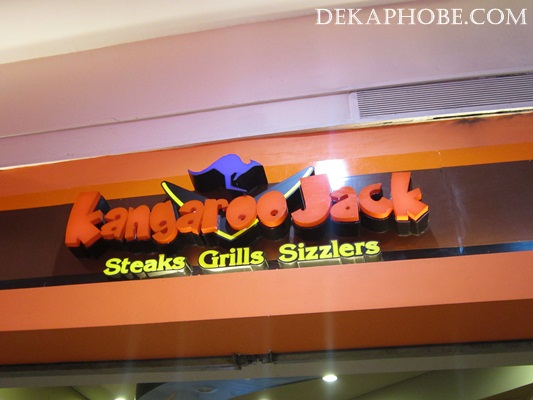 My friend and I recently tried one of the newest restos near the office: Kangaroo Jack. I was always curious about this place and with the tagline "Steaks, Grillers, and Sizzlers", I knew I shouldn't delay my visit.

I love eating on sizzling plates that it doesn't matter if I burn my tongue. During high school, I used to order a sizzling chicken or sizzling pork chop for recess. Yes, that's for recess, lunch is a different meal (those were the days when I can eat anything and not even gain an ounce). 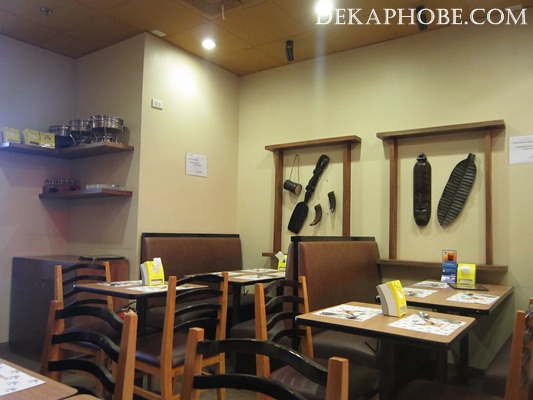 Since the place was named after an animal from Australia, the place was decorated with Aborigine-inspired displays. A picture of a kangaroo was also painted in the ceiling.

Potato Chowder is marble potato sauteed over butter, with cream based sauce and topped with bacon bits and croutons. It was served quick, but I was expecting that the soup will be piping hot, which wasn't the case for my soup.

The Tanigue Steak was supposed to be grilled, but I didn't see grill marks. I found the flesh a little too white. The serving was huge enough though.

The Sirloin Steak was served in a sizzling plate. But, it didn't sizzle. The gravy was generously poured over my meat, but come on, you wouldn't serve my meat on a sizzling plate for no reason, right?

The meat was a little too tough, that I had to grab a knife...alas! No knife! I had to look around to check if this is a common practice, but it wasn't (thank goodness I was the only one).

Kangaroo Jack still has a lot to improve in terms of food quality. For now, I'll stick with my food court favorite: Sizzling Plate.