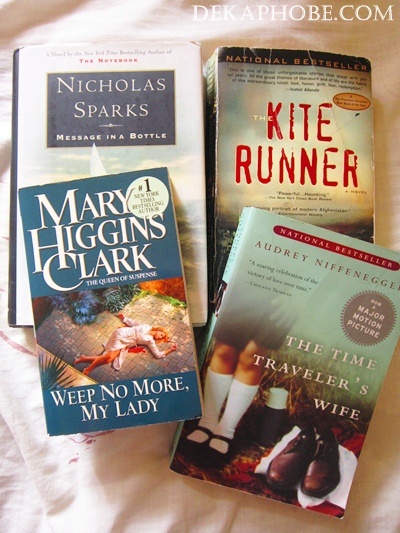 Since I was only able to read three books last February, I got back on track last March and was able to read 4 books! Now, my real problem is: I'm running out of books to read for this year! Yes, this could really be a problem when you take a book challenge seriously.

To continue my book challenge, I'm sharing with you my March books:

8. The Kite Runner by Khaled Hosseini

The first novel written by Time's one-time most influential people in the world, Khaled Hosseini, tells the story of Amir, an Afghan who migrated to the States to escape the war. He remembers his childhood friend, Hassan, the son of their servant Ali. He remembers the boy who sacrificed everything--even his honor, to keep Amir happy. But Amir sees Hassan is competing for his father's affections and he does things to keep him away. He tries to forget Hassan, but a death wish makes him go back to his homeland and redeem himself. A must-read. 'Nuff said.

I have read this before and it has always been on my must-suggest list of books to everyone.


9. Weep No More, My Lady by Mary Higgins Clark

A very popular actress, Leila LaSalle, was found dead after falling from her New York apartment and her lover, Ted Winters is the prime suspect. Leila's sister, Elizabeth Lange, seeks justice for the death of her older sister and makes sure Ted rots in jail. Just before the trial, Elizabeth receives an invitation for a quick holiday at Cypress Point Spa, owned by Leila's friends, Baron and Baroness von Schreiber. She gets the shock of her life as Ted Winters is also at the same spa. Even Leila's former agent, Syd Melnick is also at the Cypress Point Spa. Everything begins to unfold as who the real killer is, or was it an alcoholic gone crazy?

I was kinda bored during the first part of the book, but it becomes more exciting as some characters involved reveals a motive in killing Leila.

The revelation is quite a surprise, oh well, maybe I'm really just a Higgins-Clark fanatic.

10. Message in a Bottle by Nicholas Sparks

Theresa, a columnist, and divorced mother were jogging along the beach when she found a bottle with a letter inside it. It was addressed to Catherine from Garrett. She found the letter so moving that she went to her editor to see the letter. Her editor urged her to publish it. Curiosity got into her that she found 2 more letters from Garrett. A little research and she found herself at Wilmington, where Garrett owns a diving shop. A friendly invitation to sail lead them to each other's arms, with Theresa not telling Garrett that she found his letters to Catherine.

Does Garrett really love her? Has he let go of Catherine? Would she be willing to leave Boston and live in Wilmington? Would Garrett be willing to do the same if she refuses?

I wasn't able to watch the movie so the ending was quite a surprise. It was so moving. Time is really precious so we should always tell our loved one that we love them.

The novel tells the story of Henry DeTamble, a librarian with a genetic disorder that allows him to time travel, and his wife, Clare Abshire, who met him when she was six while Henry meets Clare for the first time when he was 28, and she was 20.

Henry and Clare get married at present, with Clare having to deal with Henry's disappearances, which can be as short as a few minutes and can be as long as a few weeks.

Clare had difficulty bringing a pregnancy to full term since the fetus also 'time travels' inside the womb. After many miscarriages, Henry gets a vasectomy. But a pre-vasectomy Henry visits Clare and gets her pregnant. They named their baby Alba. Alba inherited the genetic disorder from Henry. Henry time-traveled to a wintery place gets hypothermia that both of his feet had to be amputated. Henry sees himself dying at age 43. He prepares a letter to Clare and tells her to "stop waiting" for him. And he time travels to see her in her old age.

This is one of my favorite books, and I'm so in love with the movie version too.

It tells me that true love endures, no matter what.