My Second Mission to Army Navy 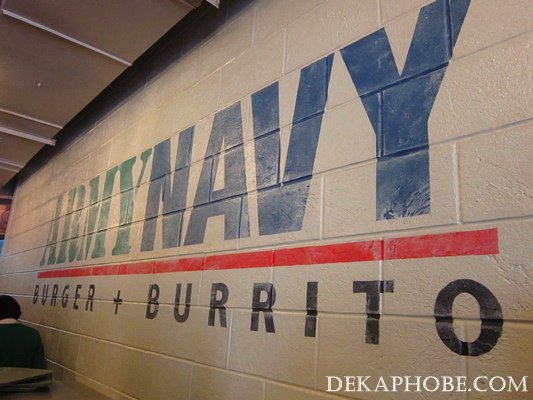 I already did a review for Army Navy during my first month as a blogger, and I thought that a second review would be appropriate to this restaurant as this place never fails to make me feel satisfied every time I visit.

Army Navy Burger + Burrito is a military-themed restaurant that offers affordable American and Mexican specialties. There are some people who think Mexican food is pricey, but you might be surprised at how affordable Mexican food is in Army Navy. Everything is so good that even the iced tea is a must-try.

Our visit to Army Navy that day was accidental--our target resto (a burger resto, but I wouldn't drop the name here) doesn't deliver yet in Ortigas, much to our dismay. However, my burger addict friend hasn't tried Army Navy yet, and so we brought her there.

Army Navy Burgers are made with natural beef patties, with lettuce, tomatoes, onions, mayo, and ketchup on their signature Sesame Seed Kaiser Bun. Their burgers are available on single, double, and triple patties (called "Bully Boy Burger"). It was so delicious that I didn't need to add anything to it - it wasn't dry nor too moist. The bacon was so thick that I had to eat it separately.

My friend ordered Steak Burrito (Php 165), which is a Mexican specialty made with a flour tortilla filled with beef, Spanish rice, beans, onions, lettuce, and cilantro.

I remember that this is the first item I tried at Army Navy. It was so filling that I wasn't able to finish everything, and I remember having a difficult time standing up after eating. I usually request for "no cilantro" on my burrito since I don't enjoy its aftertaste.

Another friend ordered Fearless Fried Chicken (Php 145) which has two pieces of chicken and rice served with pepper gravy.

I'm not sure if there was anything special with the chicken, but I was curious about the pepper gravy.

Eating burgers and burritos would not be complete if we didn't get Freedom Fries (Php 65) and Onion Rings (Php 65).

Freedom Fries wouldn't be included in Spot.ph's Top Ten Best French Fries in Manila for nothing. It was such a hit that there was a time that Army Navy run out of Freedom Fries for a while, a time which I referred to as "the dark ages". It has a spicy edge but I still love it! The Onion Rings was crunchy that I didn't mind the onion breath after.

One of the things you shouldn't miss ordering from Army Navy is the Libertea (Php 65 for large). Libertea is Army Navy's freshly brewed iced tea. The sweetness is just right, and it was really good that you'd drink it to the last drop.

I have yet to try the breakfast burrito, Starving Sailor, Quesadilla, and their newest item, the Querida Mia. 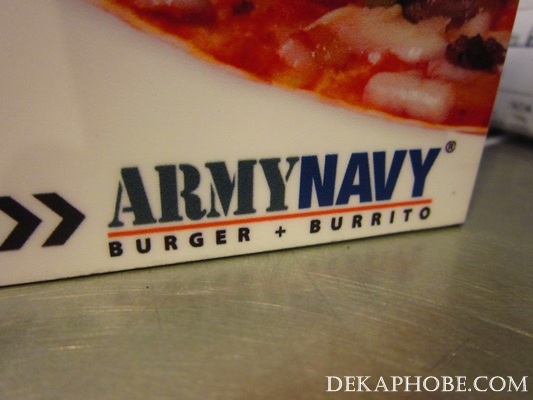