July 09, 2011
I have been an admirer of Bollywood movies lately. Bollywood movies are amusing, though some scenes can be ridiculous. :)
My first encounter was during my bus ride for my passport application, the movie playing was an Indian robot movie.
The movie got me entertained as EDSA traffic was progressing from worse to worst. As I alight the bus, I was frustrated that I didn't get to finish the movie. I took note of the character names so that I could google it at home.
I discovered that the movie title is "Enthiran", which is Tamil for 'robot'. The movie stars the 60year-old actor Rajinikanth and the oh-so-beautiful Aishwarya Rai. The movie poster is shown below: 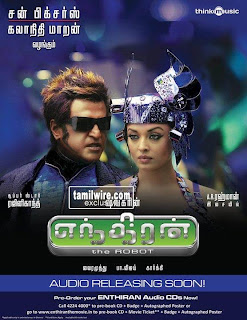 As of this writing, I just finished watching "3 Idiots" starring (my newest crush) Aamir Khan. He's so adorable. :)
See his picture here: 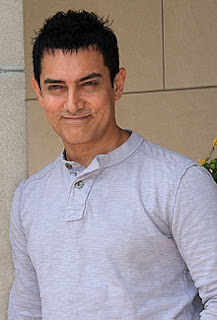 I did research and found that the 2 Bollywood films mentioned above are top-grossing movies in India. Also, Bollywood is one of the biggest movie industries in the world.
I hope that Bollywood would influence Filipinos like Koreanovelas and J-doramas did.
Here are my reasons why I think life is like a Bollywood movie:
1. There would always be a hero and a damsel in distress. And a villain.
- Either we save others, we kill others or we ask help from others.
Life makes us choose a role for every situation, and we cannot be 2 persons at the same time.
2. The "sing-and-dance" portion
- A Bollywood movie is not complete if there is no sing-and-dance portion, where the main characters would lip-sync and dance in beautiful costumes with lots of backup dancers.
If you watched "Outsourced", Gupta did a dance number ala Bollywood too.
I love daydreaming. I think everyone loves it too.
It's never wrong to dream for the ideal, that how we wish that life would be just a sing-and-dance routine, with the beautiful costumes. And happy ending. :)
3. The unending search for love
- Guilty as charged!
In Bollywood, the characters would search for the partner at all costs.
In Enthiran, Dr. Vaseegaran (the hero) disguised as Chitti Babu (the robot villain) to save Sana (the damsel).
In 3 Idiots, Pia (the damsel) escaped on her wedding day to look for Rancho (the hero), who ceased all contact for ten years.
A Bollywood movie is always cheesy, but aren't we guilty for cheesiness when we're in love? :)
4. The "I-cannot-look-at-this" scenes
- As I was watching Enthiran in the bus, there is this awful scene that made me look at the window and try to enjoy the EDSA traffic.
In life, there are situations that become so unbearable that we'd rather look away and wish it would just pass. Yep, the awful scene did pass and I got back to watching the movie. :)
5. Bollywood movies can be ridiculous
- Bollywood movies can be ridiculous that you would wonder why they took that scene anyway. Nevertheless, it got me entertained.
Life sometimes makes no sense, but is sense really necessary? :)
6. Forgiveness, Family, Friends
- Most Bollywood movies evolve around these 3 F's. And as I have observed on the 2 movies, love is something minor. The 3 F's are the major issues. Even the mortal enemies in the movie learn to forgive. Even the hard-hearted dads let go of controlling their children.
If only people would learn that life is like a Bollywood movie, the world will be a better place.
yes, cliche, but when will we ever learn?