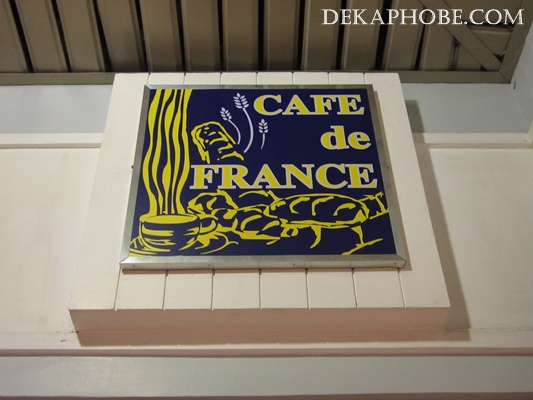 My friend and I were supposed to fly back to Manila during that afternoon, but after for some reasons (maybe bad weather), our flight was delayed. So instead of waiting at the airport, we decided to kill time at Mactan Marina Mall. Yes, this is the same mall where the following restaurants are located:

Zubuchon (across the street)

We had a quick massage at Nuat Thai first, then decided to have an early dinner before we return to the airport. Since we really need to relax, we chose Cafe de France for its homey ambiance.

Cafe de France is a French-Italian restaurant that originated in Cebu. It has several branches around Metro Cebu, with the Mactan Marina Mall as its main branch. They offer savory dishes, sandwiches, soup, pasta, drinks and all day breakfast. They also sell cold cuts and fresly baked breads. Since we just had a heavy lunch at Harbour City, we decided to go with something comforting: breakfast. :)

My friend ordered a Classic Waffle (Php 120). You can also have Classic Pancakes for the same price.


It has 2 pcs of waffle, butter and maple syrup. It was well cooked and really good.

I had a Classic American Breakfast (Php 160). It also includes a cup of brewed coffee or tea.

The Classic American has bacon (or ham), 2 eggs and toast. But instead of toast, I requested to have garlic rice, and they did (yey). It's just what I needed since we were having a bad time. The relaxing ambiance helps a lot too.

I'd definitely go back to try the savoury dishes next time I visit Cebu. 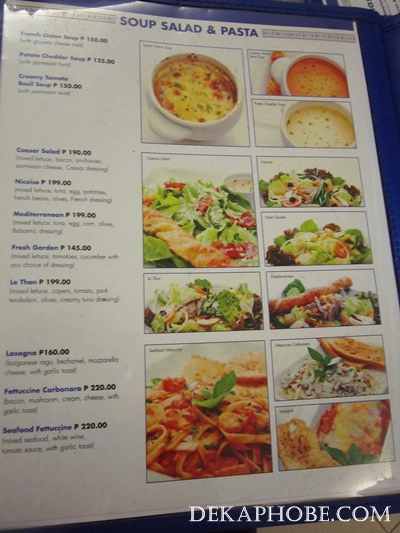 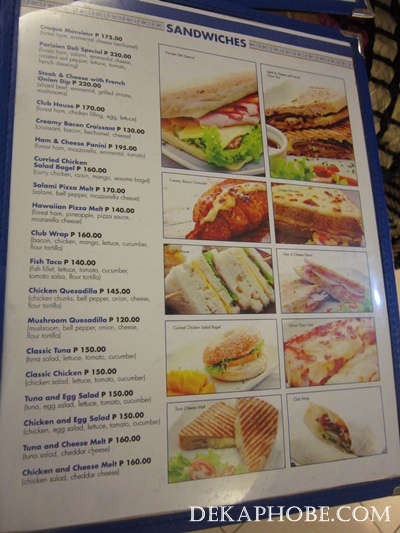 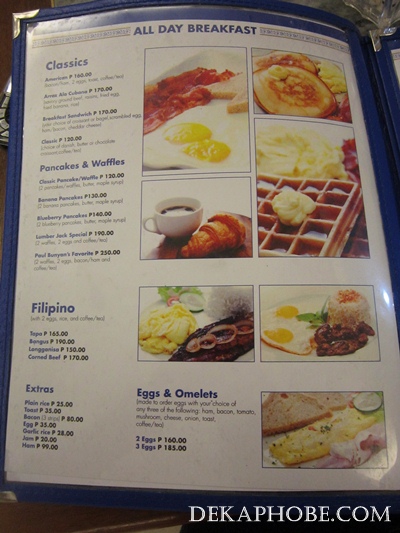 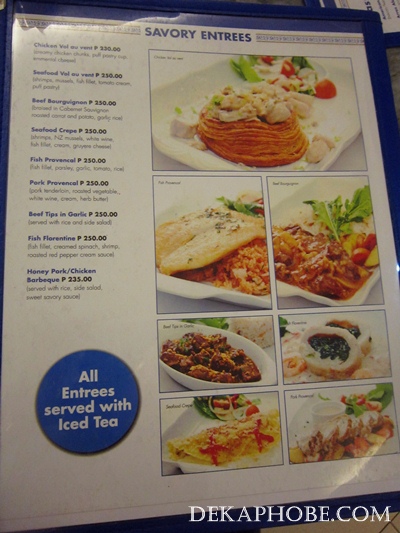 Other locations include JY Square and Robinson's Fuente

Popular posts from this blog

July 15, 2013
Mother dear celebrated her birthday last month, and as I always do, I bought her a birthday cake. Last year, I got her Grandma's Chocolate Cake from Purple Oven, this time it's Mango Bravo by Conti's.
One of Conti's bestselling cakes, Mango Bravo is available in two sizes: Mini (Php 665) and Regular (Php 1195).
Thinking about the amount of food that will be stored over the weekend, I bought the Mini.


Mango Bravo is a wafer-based cake with cream, topped with slices of ripe mangoes, with choco syrup and cashew nuts. Oh, this cake needs to be frozen, btw (super thanks to my friend Mike for taking me and my cake home safely. hehe.)

May 25, 2012
I've always been curious about Chocolat eversince a friend told me it's really good. PLUS it was included in Spot.ph's Top Ten Chocolate Cakes in Manila so I suggested that my friends and I meet up at this hidden cake store in Katipunan area.

Chocolat offers signature chocolate cakes and other specialty cakes. The place is a small shop that could only sit 10 persons. Customers usually drop by to buy cakes for takeaway.

October 28, 2015
Acne is one of the most common skin problems among teenagers. Also, acne can affect adults.
What causes acne? According to MayoClinic, the four main factors that cause acne are oil production, dead skin cells, clogged pores and bacteria. Hormones, certain medications, diet and stress are also huge contributors that can trigger acne.
Here are the basic prevention tips you can do to avoid acne:
1. Use less oil-based skin products.
Using oil-based sunscreen, cosmetics, and other skin care products makes you more prone to acne.
2. Watch what touches your face.
Avoid resting your hands and other objects (like your phone screen) to your face.
3. Don't prick your pimples
Just don't.
Here comes a more effective solution to prevent acne: Acne Care Beauty Soap.